East Carolina has never been a program that worried about moral victories.

Sure, this is an improved Pirate team that is playing teams tough at times. Still, the wins just continue to elude this ECU squad.

This is a team that is getting closer. But it’s also a team that continues to be frustrated by not making enough plays to get a win.

“You can’t say you’re a play away or two plays away,” said head coach Scottie Montgomery at his weekly press conference on Monday. “Almost doesn’t really get it done. I’m more concerned with the plays that we made that came off the board. The long field goal by Jake Verity….points coming off the board. The reverse that we had of course scripted at that point in the game, and points come off the board.

“It’s not about the one or two plays; it’s about the discipline in games. The penalties in games. The ones that weren’t touchdowns that were penalties. So, we’ve got to continue to stress that and go as hard as we can on making sure guys understand that one play at a time and not after the game, what about one or two plays. We’ve got to make sure our discipline stands up throughout the game.”

Montgomery’s promise of a bowl game in 2018 won’t happen. Five losses in a row after a 2-2 start ended all hopes of a postseason bid for this Pirate football team.

So what does this squad have to play for?

“It’s always motivation,” Montgomery said. “But it would have been motivation in my first year and that would have been it. The locker room is totally different. Everything is different in that locker room. The one thing I have to do is I have to make sure that I’m making the biggest investment for our football team and our players throughout the time here. Just time spent with each of these guys.

“The locker room is completely different. It would have been motivating these guys. But we practiced on Sunday, the day after a huge game for us where we didn’t come out victorious, and we practiced extremely well. So those are the things we had to come across.

“But we’ve got to continue to keep our guys healthy. That’s probably the biggest hurdle at this point in time.”

Health is always a big issue this time of the year. At East Carolina, those injuries have especially hit on the offensive line.

“Probably the biggest part of the frustration is that we had found the five that we really liked and like working together,” explained Coach Montgomery. “Throughout the off-season building to that. It was hurtful when we lost one of them, when we lost two of them right beside each other; it was really tough for our offense. We’re going to have to adjust this week. We’re still going to have to have the ability to run the football. We’ll make some adjustments that’ll probably benefit our offensive line a lot more than we have in the last couple weeks.”

East Carolina opened as a whopping 18-point favorite to beat Connecticut this Saturday night at Dowdy-Ficklen Stadium. It’s a 7 o’clock kickoff for a team on a losing streak and for a team that has played in front of two of the leanest home crowds in recent memory.

Celebration of a Special Life

On a side note, if you’re in town this week please consider coming by TieBreakers in Greenville on Thursday night. Brian Meador, who produces the ECU coaches’ shows for IMG Sports, recently lost his wife Kim after a courageous battle with breast cancer. We are hosting a “Celebration of Life for Kim Reaves” and have some terrific items that we are raffling off. All of the proceeds will go to Kim’s Relay for Life team and to Brian to help offset their medical bills. 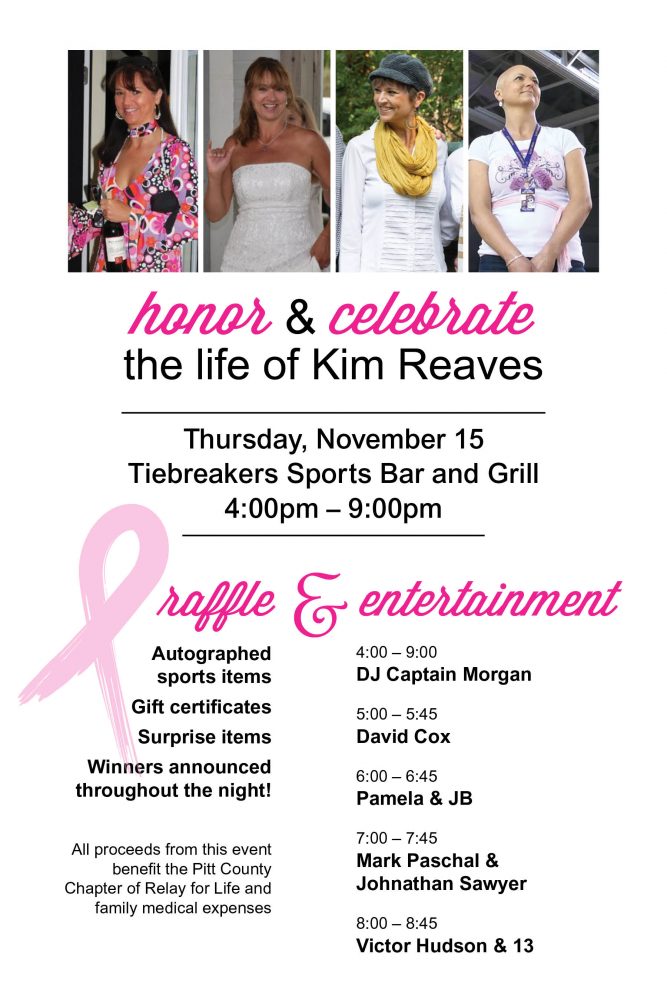 We have all kinds of Pirate related gifts in the raffle, like autographed footballs and jerseys. Raffle tickets are $10 each or three for $25.

Several musical entertainers will be performing and it will be a true celebration.

Kim was a great Pirate and I promise you’ll have a great night and will most likely win something nice!